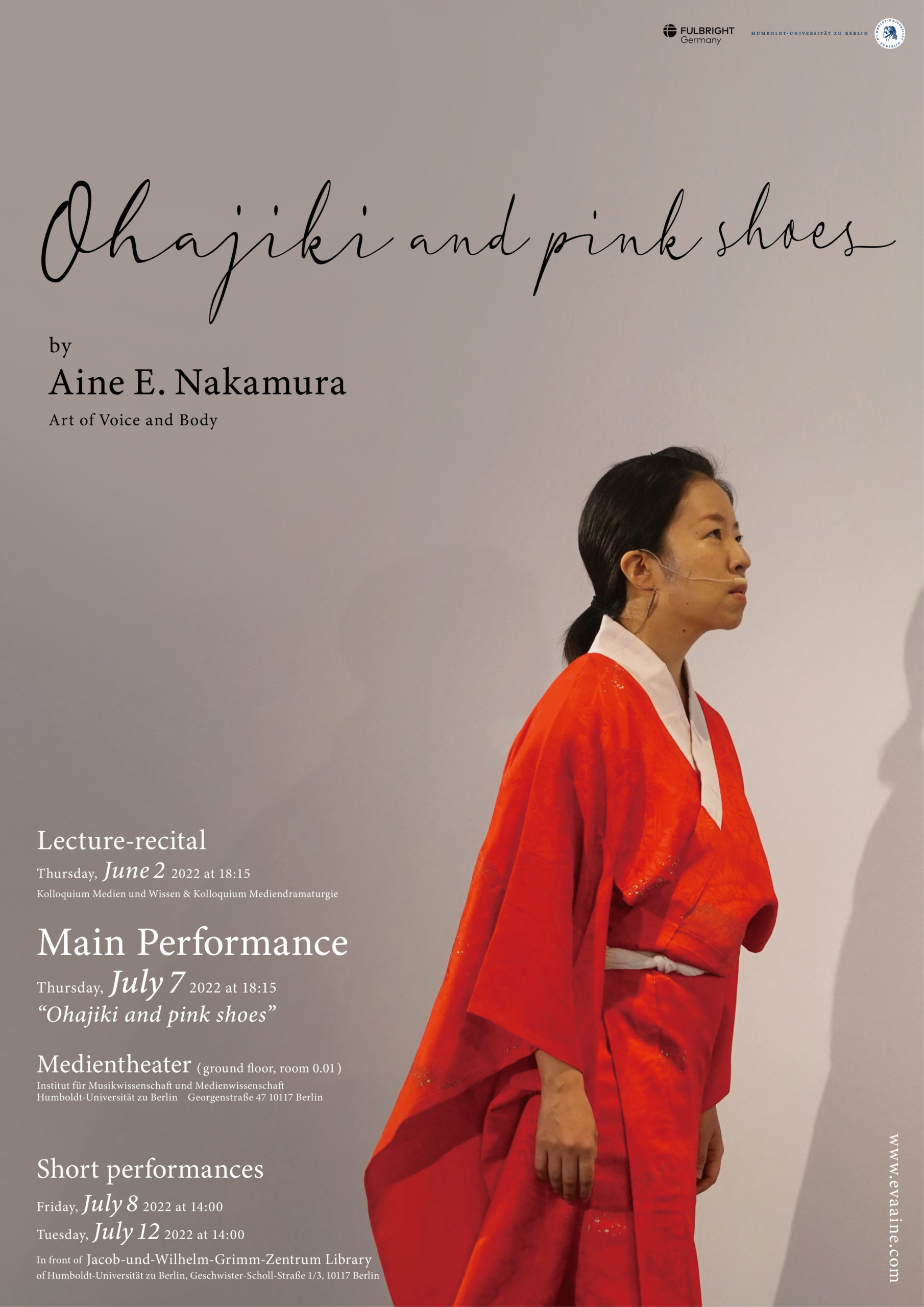 Through her Fulbright residency and transnational identity, Aine Nakamura focused on creating peace-promoting art works. She will show her series of performances including the main performance at Medientheater on July 7th, short performances in front of Jacob-und-Wilhelm-Grimm-Zentrum Library on July 8th and 12th, and lecture-recital at Medientheater on June 2nd. Using vocal sounds, non-notated melodies, movements, and spoken words, between which she fluidly moves, she creates her transborder art and presents her new art language for beings and inner. In her new art, she focuses on orality, and songs in and as bodies. Nakamura ultimately asks, at this time when peace has become a difficult and yet crucial topic for humans, “what can I add to the postures that I learned from my great grandmother?” for her idea and being in her creative process, which she comes to know what her new art is and can be about.

“I pursue sensibility and spirituality as my aesthetics through a focus on the nuanced possibilities of my voice. I am song itself.”

Aine E. Nakamura is a singer, composer, and performer, and a grantee of the Fulbright fellowship (Berlin 2021-2022). She is a Fulbright fellow at Humboldt-Universität zu Berlin invited by Professor Viktoria Tkaczyk and Universität der Künste Berlin invited by composer Marc Sabat. Her upcoming performances include a new work for site-specific performances at the Venice Biennale at its 50th International Theatre Festival. She has presented her solo performances, installations, and compositions at Berliner Festspiele 2022 Theatertreffen, the Gallatin Galleries NY, HfM Hanns Eisler Berlin, A Concert of Electronic Music in honor of Mario Davidovsky, Dias de Música Electroacústica, October New Music Festival in Finland performed with Mikro Ensemblen, and Abrons Arts Center with International Contemporary Ensemble. Her other appearances include The Two directed by Dmitry Krymov (New York Theater Workshop), and OPERA Ensemble at Watermill Center. MA from New York University (The Leo Bronstein Homage Award). In addition to her artistic pursuit, she studied orality in ritualistic songs by women and villagers in Okinawa and Yaeyama supported by NYU Asian Pacific and American Institute. www.evaaine.com